With the exception of those covering the Pennine Way it is very rare to see a walking guide treat the Pennines as a continuous range of hills and provide a variety of walks covering the whole region. It is more typical to find walks about specific areas, particularly the Peak District and the Yorkshire Dales. Therefore, When I saw that Cicerone were publishing a new walking guide called, 'Great Mountain Days in the Pennines' I was rather curious and more than jumped at the opportunity to review it. 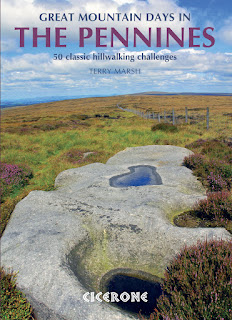 The guide is written by the Lancashire-based writer and photographer Terry Marsh, a name that will be familiar to those who have collected a number of Cicerone walking guides. I for one found his book of walks on the Isle of Man of particular use when I spent a week on the island back in 2008. In his introduction Marsh explains that the walks in this book are largely confined to within 10 miles of the Pennine watershed, exceptions being routes on to Ilkley Moor, Pendle Hill and Ingleborough. Unfortunately this approach means that the Forest of Bowland and the West Pennine Moors, both outliers of the main range, are omitted entirely so don't expect to find a route up the likes of Winter Hill or Ward's Stone.

The 50 walks are organised from north to south starting in the North Pennines, perhaps the least visited and certainly the most underrated area in the Pennines. By happy coincidence the first walk in the book is a climb on to Thack Moor, which, following a survey proving that it reaches the magical 2,000ft mark in height, has the distinction  of being England's newest mountain . Presumably the book went to print just before Thack Moor's elevation to mountain status was known as it is not mentioned.

Each walk is generously illustrated with photos and contains an introduction, detail on the route (including OS map) and an overview 'Route Information' box that includes detail on distance, height gain, how to get there and where to find after walk refreshment. In what must surely be an editorial mistake this 'Route Information' box is missing on walks 23 and 48 (Rye Loaf Hill and Alport Castles respectively).

The walk descriptions are well written without being overly detailed. It should be noted that the book is quite large and would be quite unwieldy to carry around on a walk. This is perhaps a good thing as most of these walks definitely require the possession and ability to use the relevant map so it would be a mistake to rely on the book for direction anyway.

Occasionally Marsh lets himself go a bit with some nicely evocative passages, for example, he describes the South Pennines as, "a great swathe of harsh moors where the lovely orange and gold crystals of millstone grit have oxidised to a black that makes your eyes hurt and portrays, falsely, a land of darkness and dirt". His frequent description of the Howgill Fells as 'bosomy' will ensure that I for one will never quite look at those hills in the same light again!

Whilst opinions on the 50 best walks in the Pennines will always be a subjective one I think Marsh has, on the whole, chosen many of the routes, or at least variations that I would have picked myself. There are a few notable exceptions. It is a shame that Cold Fell doesn't feature. Not only is it the northernmost mountain in the Pennines, and one of only five Marilyns to be found in the North Pennines, it is also a great walk to the top with some stunning views. Personally I'd have liked to have also seen a walk around Crummackdale featuring Norber and Moughton, an area that is second only to Malham for limestone scenery. Finally there is Bleaklow, the omission of which from a book subtitled '50 classic hillwalking challenges' is quite frankly perplexing. Surely these were more worthy of inclusion than than some that are included and while I love the Howgill Fells did we really need three separate walks that visit the summit of The Calf?

These latter reservations aside it is a great book, especially for people who are not familiar with some of the less frequented areas of the Pennines. Marsh deserves a lot of credit for including places such as Thack Moor, Backstone Edge, Gragareth, and Thievely Pike and resisting the temptation to fill the book predominantly with routes in the Dales and Peak District. As a result even walkers, like myself, who have already explored a lot of the Pennines are likely to find much of interest in this guide.

'Great Mountain Days in the Pennines' can be purchased from the Cicerone website.