The title of this blog should be fairly self-explanatory. As my website testifies I love walking. At the same time anyone who knows me personally will also know that I am a fairly unashamed eater of meat, my favourite meal is still a traditional roast beef served with yorkshire puddings and lots of horseradish sauce. So I love walking, I love beef but as the title says I hate cows. More specifically I hate coming across cows when I'm out walking as quite frankly they scare the crap out of me! 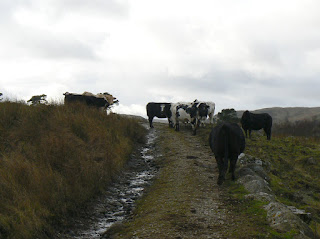 Now cows have a reputation for being fairly docile creatures who stand around all day chewing the cud and basically doing very little else apart from leaving very large 'pats' for the unwary traveller to step into. I know better though. You see I seem to have had problems with cows going all the way back to childhood. Indeed it was an incident on a school trip, when a cow took umbrage to the fact that I'd stroked it, that I gained my first nickname - Mattmoo. Since then I've always been wary of cows but it was not until I took up walking as a hobby that I've been forced into regular contact with them, often with scary results. 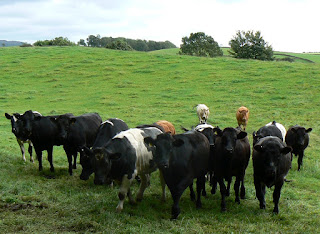 For example, last August I was walking back to Renwick towards the end of a superb walk on to Black Fell in the North Pennines when I was confronted with a field with some cows in it. Now because of my bovinephobia I stood a while contemplating going the long way round via a road. In the end I decided to 'man up' and face my fear, though I still tried crossing the field whilst staying as far away from them as possible and with my eyes averted in order to cause the least offence. I got to within 15 metres of the gate on the far side when they just started to run towards me. I certainly wasn't going to wait and ask them what they wanted so legged it to the gate which I then hit at high speed, flipping me over and landing me on my back on the far side. Thankfully there was no one around to have seen my spectacular vault over the gate nor the subsequent hand gestures I made at the vicious brutes once I realised I was safe. It was more than my pride that was bruised though, I had a sore shoulder for a week and a bruise up the whole of my right shin which lasted about a month. 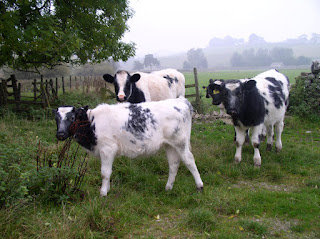 Young cows and calves are a particular problem. Whilst a lot of cows are admittedly just as nervous of me as I am of them the youngsters have, to me, a rather unhealthy streak of curiosity. I remember one time in 2005 when returning from a fine tramp in the upper reaches of Colsterdale and Nidderdale I was crossing a field full of cows and calves. A small group of calves decided to check me out so the mummy cows followed to keep an eye on them. Within seconds I had cows heading towards me from all directions so I clambered up on to the nearest drystone wall for safety only for all the cows in the next field to come and check me out as well. I stood on that wall for almost 5 minutes completely surrounded before I plucked up the courage to jump off and make a dash to the nearest gate and safety (fortunately I got over this particular gate without any mishaps). On a more recent occassion I can remember being tracked by a young cow, which kept calling back to the rest of the herd, for over 400m across open fellside before it eventually gave up and left me alone. 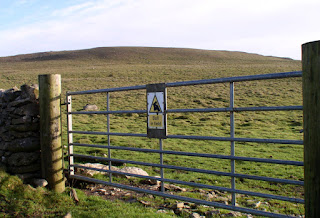 I've had numerous other incidents over the last few years and just a couple of days ago my mere presence seems to have a sent a gang of bullocks in to a frenzy as they charged up and down alongside the rather flimsy looking fence desperately trying to get to me on the adjacent path. Given the rather dubious protection of said flimsy fence I climbed over into the next field for extra protection. Strangely enough though I've not really had too many problems with bulls. I've seen plenty of 'Bull in field' signs but most of the time said bull was nowhere to be seen (in fact they are almost never seen which makes crossing a field with such a sign all the more nervewracking just in case the local bull is equipped with some kind of invisibility cloak). 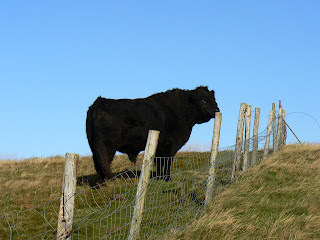 The one time I came close to a bull without the protection of a wall was, rather bizarrely, on the summit of Fellbarrow in the Lake District. It was stood just yards away from the trig point. I'm still rather proud that I plucked up the courage to go up to the trig point and take some photos but to be truthful the bull barely moved, it seemed to be too engrossed in the view across the Vale of Lorton to the North-Western fells to have any interest in me, and to be honest who can blame him. It should also be said that I've had very little problems with 'hairy' breeds of cattle such as the Galloway, Belted Galloway or Highland cows, all of which can today be found on the high limestone pastures of the Dales, particularly around Malham and in parts of Ribblesdale. 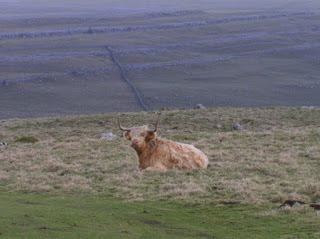 Other than the omnipresent fear of getting trampled by rampaging cows (and lest anyone think I am being over the top it does sadly happen to unfortunate walkers) there is another reason to dislike cows. Farms, often not the most fragrant of places anyway, are usually much worse for the presence of cows. I hate it when I have to cross a muddy farmyard especially when you just know that the 'mud' you are squelching across is an unholy mixture that is at least two parts cow dung and urine. Cows also have a tendency to trample wet ground into a quagmire which makes even crossing a field they have vacated a rather messy experience. 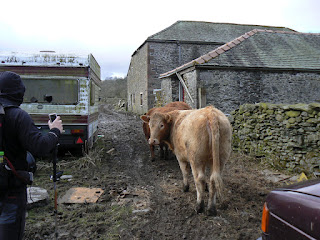 If given the choice I'd prefer to avoid farmyards altogether and it would make me happy if I never had to walk through another field of cows again. Unfortunately this just isn't practical. If I want to continue exploring our glorious countryside I'm just going to have to find a solution to my dislike and fear of bovine kind. Perhaps I could ask one of those bulls if I could borrow his invisibility cloak.
Posted by Unknown at 17:43 2 comments: