Taking a holiday from the Pennines

For the first time since 2004 all my walking this year has been done entirely in the Pennines and Cheviots (a 1½ mile ramble above the Sutton Bank White Horse notwithstanding). I have also not had a full week off work this year.

In more ways than one then next week in Wales will be a holiday for me. Firstly, it will be a chance to spend some quality time away with my family in an environment that is fantastic for Rhiannon. Secondly, I will hopefully get the chance to do a couple of walks. I say hopefully because last year when we also went to Hafan-y-Mor the weather was dreary and grey almost the entire week.

Last year I was also handicapped by the problems I was having with the cartilage in my left knee. The combination of poor weather and dodgy knee meant I had to forego the planned excursions into the mountains of Snowdonia to settle instead for exploring the hills of the Lleyn Peninsula. Fortunately for me Lleyn has some quite excellent walks to offer. Carn Fadryn is a good little climb and is also the site of an ancient hill fort. Even more impressive is the extensive remains of the hill fort on Tre'r Ceiri which I visited as part of a super walk including Yr Eifl, the highest point on the peninsula. Another, much shorter, walk involved an exploration of the colorful headland of Mynydd-Tir-y-cwmwd.

While this year I may well do another walk in Lleyn itself I'm itching to get into Snowdonia and fingers crossed I want to sample the delights of the Moelwynion and Rhinogydd ranges. As much as I love the Pennines I have to say I'm quite excited about getting into more mountainous terrain again. I'll report on my success (or otherwise) on my next blog. In the meantime here are some pics from my Lleyn adventures last year. 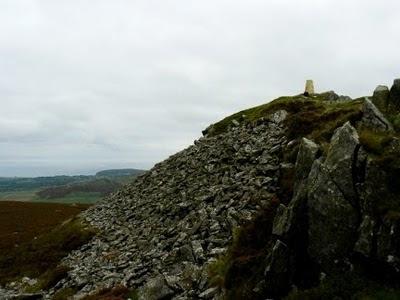 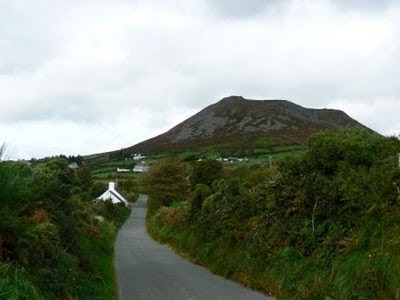 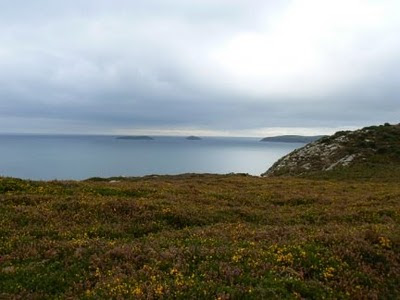 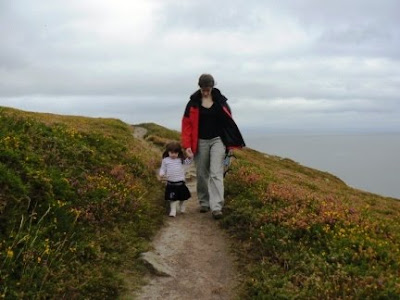 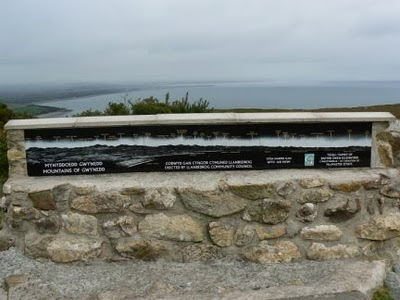 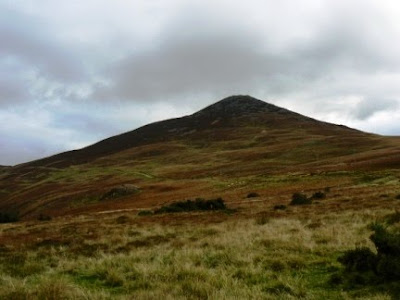 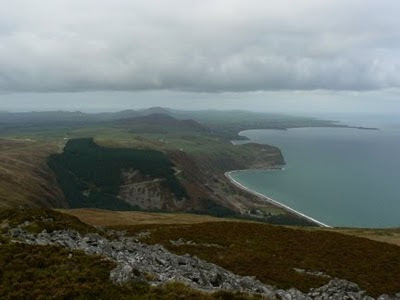 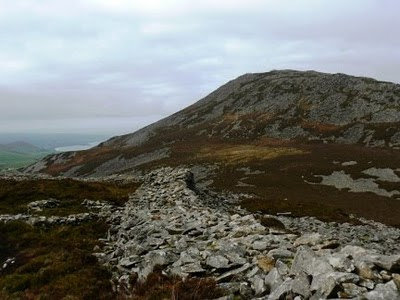 Back in April I psyched myself up to tackle the notoriously peaty Black Hill for the first time. Everything that I had read and all the pictures I had seen suggested that the summit of Black Hill was like no other.

"The broad top really is black. It is not the only fell with a summit of peat, but no other shows such a desolate and hopeless quagmire to the sky. This is peat naked and unashamed."

What I found was in fact very different.

At the time I wrote, "I expected almost the entire summit plateau to be bare peat with very little vegetation. In fact this was not the case and I was surprised at how much grass and heather there was." Compare for example the picture I took below of the last stretch of the paved Pennine Way leading to the summit with a picture on the V-G website that was taken from a similar position back in 2004. 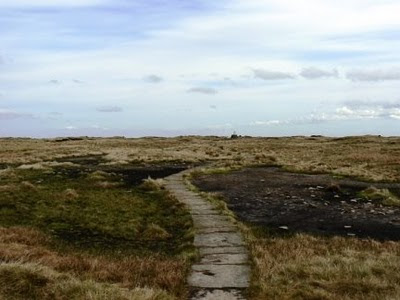 I finished my log of the walk by writing, "perversely I was slightly disappointed that Black Hill did not offer more of a challenge underfoot though no doubt if it had been the quagmire I'd expected I would have thought otherwise." Even taking into account of the dry conditions at the time I was still somewhat baffled about what the fuss was about. 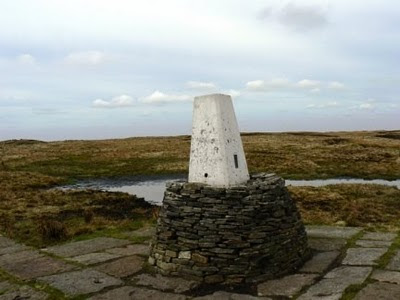 Yesterday, a few chapters into Andrew Bibby's excellent book 'The Backbone of England' I found the answer to this puzzle. Bibby devotes the entire third chapter of his book to Black Hill and the moorland restoration work being done by an organisation called 'Moors for the Future'. Their aim is to not only halt the peat erosion in places like Black Hill and Bleaklow but to revive the blanket bogs that were once the main feature of these hills.

One method of doing this is by laying anti-erosion mats made out of jute mesh. I saw plenty of evidence of these, especially on the route down from the summit over Tooleyshaw Moss. Another method employed is reseeding the area with grass and spraying it with liquified sphagnum moss. Interestingly the book quotes one of the leaders of the project as saying, "I'm very confident: we'll turn Black Hill green in a couple of years". The book was first published in 2008 and from my experience it looks like that confidence was not misplaced. 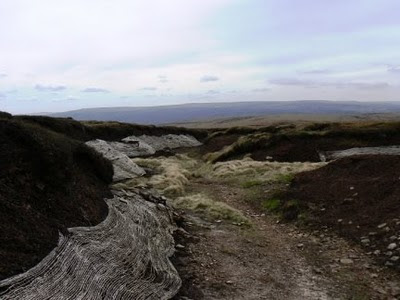 I'm glad that for me the mystery of Black Hill has been solved. However, while the activities of 'Moors for the Future' are entirely laudable I cannot help but feel I've missed out on something. Wainwright's description of Black Hill continues,

"in the flutings and ripplings of the dunes ... a certain strange beauty, a patterned sculpturing beyond the skill of man, must, however, be conceded."

The changes to Black Hill mean that I will probably never experience Black Hill in this way. 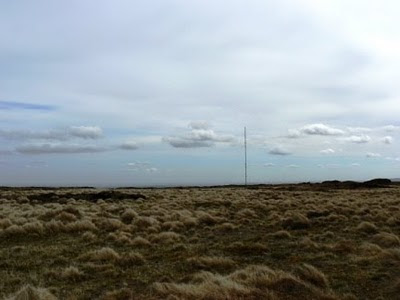 It has been a while since I last posted on this blog. To be fair I have just moved house which has meant that I have had even less spare time than normal. Still only 3 posts in 2 months is a poor effort – I’ll never get anywhere on search engines at this rate!!

I’m beginning to wonder if I have bitten off more than I can chew with my website and this blog. Don’t get me wrong I’m really pleased with what I’ve put together but I want to do so much more! I barely have time to update my walks without even adding all the summit pages that I want to. I think it will be easier when I’ve finally got all my Yorkshire Dales walks on this site from 2004 and 2005. In the meantime I have managed to add my index of walks for 2006.

Since the move I’ve managed to at least get in a reasonably busy month of walking in August. All the walks have been memorable for one reason or another. Special mention must go to Bleaklow and Beacon Hill. The walk up Bleaklow was a real challenge mainly due to having to fight through a pathless region of bracken, heather, trees and gritstone and then enduring nearly everything the elements could throw at us in August including hail. Ultimately we were rewarded though with some super views from Higher Shelf Stones. 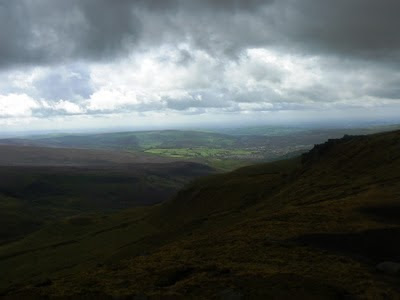 My visit to the limestone country of Westmorland was the first time this year that Lisa and I had enjoyed really nice weather on a walk together. It helped that the walk was full of interest and the long distance views outstanding, particularly from the monument topped summit of Beacon Hill. Strongly recommended. 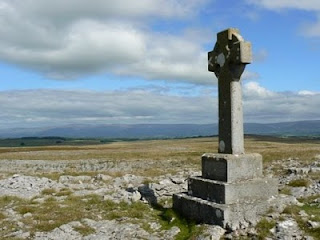