Completing the 214: My Wainwrights Journey

At 3.39pm on Thursday 2nd May 2013 I arrived, tired but elated, at the summit of St. Sunday Crag, my last Wainwright summit. I'd finally done it. It had taken ninety-three walks, 665 miles, over 219,000ft of ascent and 214 summits to get to this point, so some celebratory leaps in the air were called for (luckily I had the place to myself). 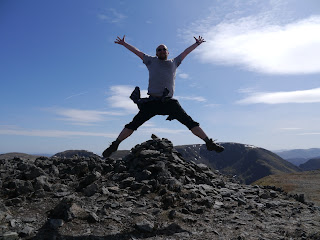 My Wainwright journey started more than seven years ago on 4th August 2005 when I first climbed Cat Bells. It was also my first proper visit to the Lake District and I was enchanted by the views of Derwent Water, the Newlands Valley and particularly the pairing of Hindscarth and Robinson. But it wasn't until the next day, when Lisa and I climbed Fleetwith Pike on our wedding anniversary that I well and truly fell in love with the Lake District.

It was one of those days when everything combined to make it perfect. The climb was steep with magnificent retrospective views of the Buttermere valley and the lakes of Buttermere, Crummock Water and Loweswater. From Fleetwith Pike we walked round to Haystacks before starting our equally memorable descent. At one point I remember turning to Lisa and saying, 'if there's a heaven I hope it's like this'. 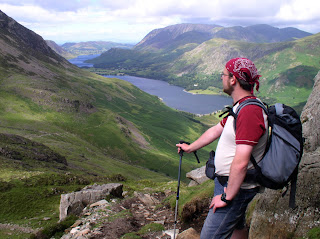 The next day I got up early to climb Blencathra on my own, via the Hall's Fell ridge. At the time I was more used to the gentler ways of the Yorkshire Dales, so it's fair to say I found it more nerve-wracking than I would find Sharp Edge three years later when I was a more experienced fell walker. Still, it was a memorable climb and that afternoon I bought my first Wainwright book: Volume Five, 'The Northern Fells'. 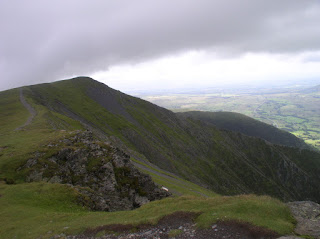 Six weeks later, I had bought and read all seven volumes. It's hard to describe the impact Wainwright's books had on me. Beautifully laid out and jam-packed with exciting walks, lovingly detailed drawings and witty prose, it marked out an author who, in his idiosyncratic way, could describe the sheer joy of exploring the hills far more eloquently than I ever could. 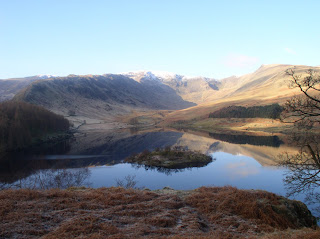 By this time I'd decided I wanted to climb not just all the Wainwrights, but every Lake District fell that qualified as a Hewitt, Nuttall, Dewey or Marilyn. I'd only been hill walking for about a year and a half at this point, but I'd already discovered the joys of peak bagging and was well on my way to completing my first, fairly modest, goal: all the 2,000ft tops in the Yorkshire Dales. 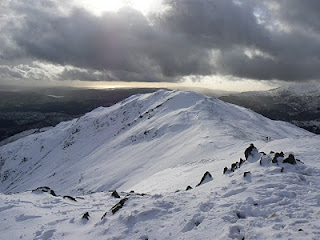 I approached this new Lake District challenge with a real fervour. Over that first year I took numerous day trips, a week in a cottage in Uldale, a few days in a cottage in Chapel Stile, two trips to a B&B in Coniston as well as camping trips to Borrowdale, Buttermere and Lamplugh. By the end of 2006 I'd already bagged 86 Wainwrights. 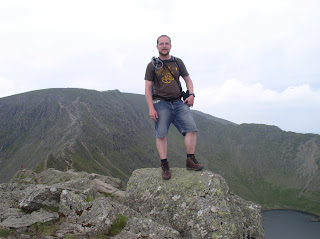 Highlights of those early Wainwright walks include spending my 32nd birthday climbing Skiddaw via Ullock Pike and Longside, the splendid climb on to High Street via Rough Crag and Long Stile, my first visit to Helvellyn and Striding Edge, the atmospheric pairing of Dow Crag and Goats Water, and the Fairfield Horseshoe from Ambleside. 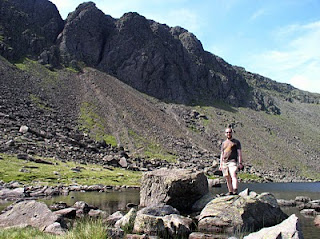 Equally memorable, for different reasons, was the frequent bad weather I encountered - particularly the heavy rain and thick hill fog I encountered when I climbed High Raise via Blea Rigg and Sergeant Man. In what is (so far) my only major navigational error, I contrived to descend from Greenup Edge into the morass of Wythburn rather than Far Easedale two valleys to the south. As punishment I had to endure a long, completely sodden walk back along the road to Grasmere, trying not to get flattened by passing traffic in the dark. Oops. 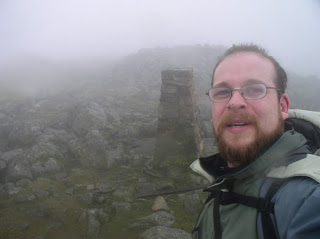 In the first half of 2007 I continued apace and bagged another 39. But that old cliché about having too much of a good thing proved true. After climbing Great Gable, Helvellyn, Bow Fell and Crinkle Crags in quick succession I overdid it and aggravated an on/off injury to my left knee on Middleboot Knotts, just below Lingmell, at the start of an ambitious route over the Scafells. I stubbornly continued over Great End, Ill Crag and Broad Crag on to Scafell Pike, effectively climbing using just my right leg. On reaching Mickledore I knew there was no way I could make it on to Scafell so instead, in the company of my father-in-law, I started the long, rocky descent to Wasdale via Hollow Stones. It was one of the most painful experiences of my life. 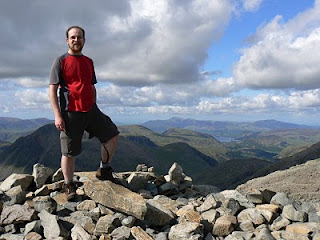 It took me a good few months to properly recover and in the intervening time my daughter was born, so there was a shift in my priorities - not to mention a reduction in how much time I could spend walking. Family holidays to Keswick in October 2007 and March 2008 helped keep things ticking over but my peak-bagging rate went into a steep decline. 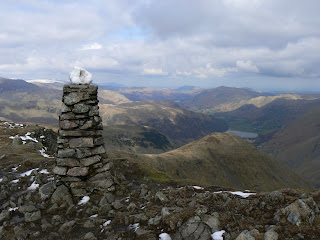 Matters weren't helped by a bad back in early 2009 followed by another knee injury later that year. Another painful descent - this time off Seat Sandal in June 2009 - finally convinced me to go to the doctor. I was diagnosed with a cartilage tear in my right knee, which required an operation, and this knocked my confidence so much that I didn't set foot in the Lake District again until March 2011. Instead I sought solace in the less rugged landscapes of the Pennines (a direct result of this period was the creation of my website, www.mypennines.co.uk). 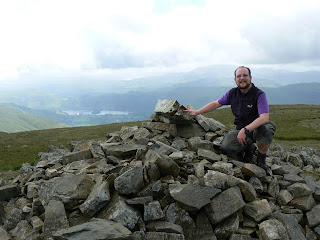 Managing my come-back climb onto Whiteside and the steep descent off Grasmoor in March 2011 was a big moment for me and reignited my hopes of completing the Wainwrights. Although I only had 29 to climb by this point I resolved not to overdo it again, hence me strictly rationing myself over the last two years. 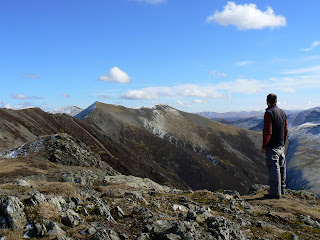 At times, being so close to completion has been almost unbearable, like a huge weight around my neck. The last few walks seemed more like something I had to do rather than something I wanted to (which isn't to say I didn't enjoy the walks themselves). So at first, when I arrived at the top of St. Sunday Crag I felt more relief than achievement: finally! It has only been later that a real sense of satisfaction and pride has begun to sink in. 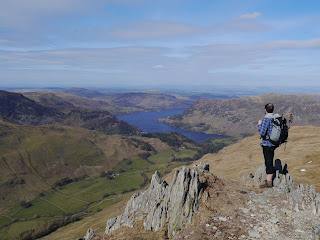 For me the Wainwrights have been a remarkable journey, physically, emotionally and mentally. But it's not a done deal - there are so many summits, tarns and ridges I'd like to revisit and new routes of ascent I'd like to try (Jack's Rake!). In fact, in many ways my journey may only just have started.
Posted by Unknown at 21:28