You can encounter many physical barriers when out walking the high places of England. Walls, fences and ditches all act as the boundary line between farm holdings, parishes and counties, both old and new. Some boundaries exist only on maps with no visible sign on the ground. To my mind there is no more enjoyable boundary to visit during a walk than the Anglo-Scottish border as it winds its way northward from above Kielder Water, along the full length of the Cheviots hills. 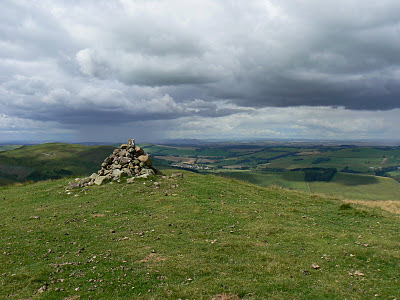 My first visit to the so-called Border Ridge was back in 2005 when my wife, Lisa, and I went on a camping trip to Kielder. After spending a suffocating night in a midgie infested tent we set off on what proved to be a grand walk over Deadwater Fell and on to Peel Fell which is neatly dissected from south-west to north-east by the border. Here the dividing line between England and Scotland is marked by a line of widely spaced wooden stakes. Without a wall or fence to hinder me I was able to take a child-like delight in literally walking along the border with one foot in England and the other in Scotland. 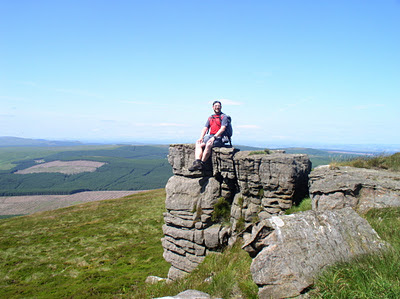 I’ve since revisited the Border Ridge several times and climbed some of its major summits, including Windy Gyle and The Schil. For much of the way the border is marked by a fence which is shadowed for most of its length by the Pennine Way. The views, both into England and into Scotland are superb and I’d rate the panorama from Windy Gyle as one of the finest in the country. Recently I enjoyed superb visibility from White Law at the northern end of the Border Ridge. Looking into Scotland I could see beyond the distinctive profile of the Eildon Hills to Broad Law, the second highest fell of the Southern Uplands over 40 miles away. 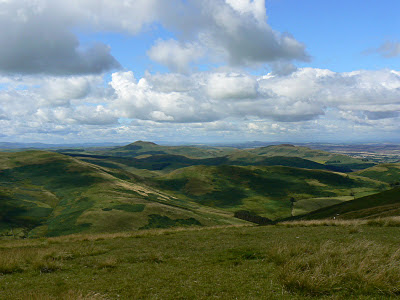 It is not just the colourful hills, the outstanding views, or the thrill of being able to cross at will from England to Scotland that makes the Border Ridge such a special place for walking. Located so far from any major urban centres the Cheviots are anything but overcrowded. Their wild beauty and remote solitude make the area a paradise for walkers. There is also a lot of history as well. Bronze Age burial cairns, Iron Age hillforts and Roman camps can all be found on or near the Border Ridge. 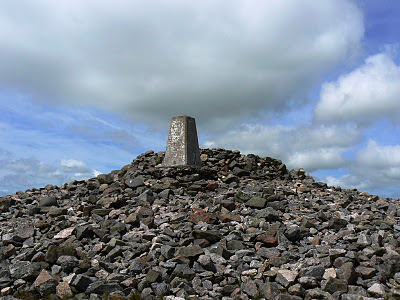 Though quiet and peaceful today it is also an area that has seen plenty of conflict. From the wars between the kingdoms of England and Scotland in medieval times to the raids of the Border Reivers in the years before and after the Union of the Crowns in 1603 the Border Ridge and the surrounding hills has seen plenty of strife. The results of the endless raids, murders, skirmishes and battles all helped form the border as it is today. 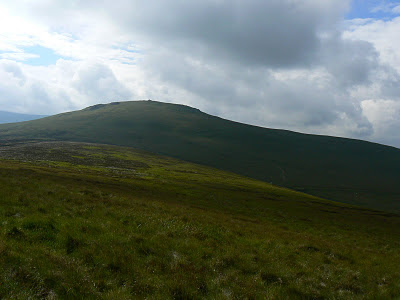 George MacDonald Fraser, author of the ‘Flashman’ series of novels and historian of the Border Reivers described the Cheviots as, ‘the most romantic hills in the world’. Whilst I have not travelled enough to dare to agree with that epithet I’d certainly argue they are among the most beautiful and the Border Ridge itself is certainly one of my personal favourite walking areas. 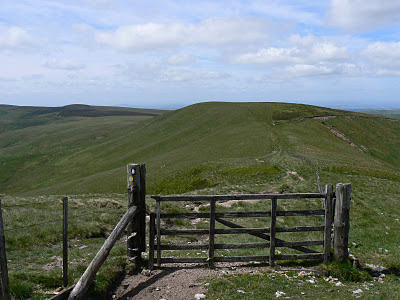 I love hill lists. Many of my walks have the ultimate aim of ‘bagging’ a previously unvisited summit from a popular hill list (I’m gradually closing in on completing the Wainwrights, the English Hewitts and Nuttalls). Ticking them off my ‘to do’ list panders to my more obsessive side, but standing on a summit is more than just an end in itself – I also use hill lists as a starting point to explore new areas. By tackling lists such as the Nuttalls and Deweys I’ve visited some quite wonderful walking country I would otherwise have missed.

So I was excited and intrigued when I was given the opportunity to review Cicerone’s latest walking guide, ‘The UK’s County Tops’ by Jonny Muir. I’ve been aware of the County Tops list for a while but my ambitions in this area have been restricted to the ones within the Pennine range. Rather than being based on the modern system of counties and unitary authorities, this book is based on the “historic counties”, i.e. counties that existed before changes to local government boundaries in 1974. That makes 91 historical county tops; 39 in England, 33 in Scotland, 13 in Wales and 6 in Northern Ireland. The county tops range in height from the 1344m high Ben Nevis in Inverness-shire, to the aptly named, 80m-high Boring Field in Huntingdonshire.

The author Jonny Muir is well placed to write this guide, having become the first person to visit all 91 county tops as part of a single 5,000 mile walking and cycling adventure in 2006. It took him more than three months to complete – a remarkable achievement.

The book is well laid out, divided into four sections that cover the county tops of England, Wales, Scotland and Northern Ireland. A short introduction to each county top is given, with a recommended route, a plan of the route using OS 1:50,000 scale mapping, and a ‘Did You Know’ section which provides a ‘Famous Native’ and ‘Interesting Fact’ for each county. Some county tops are so close to each other they can be visited in the same walk.

As the author says in his introduction, “No other hill list is quite like this one. No other is as diverse or, frankly, as wonderfully ridiculous”. The list is certainly diverse and admittedly there is something ridiculous about some of the county tops, particularly some of the ones in southern England, like the aforementioned Boring Field. Perhaps the nadir is Betsom’s Hill, the county top of Kent, which is actually inaccessible as it lies in somebody’s garden! On the other hand, for those of us, like me, who live south of the border and feel daunted by the list of Munros, the Scottish County Tops provide a doable list of hills to climb in Scotland.

The book has undoubtedly opened my eyes to the potential of the County Tops as a viable hill list, and would prove indispensable if, god forbid, I ever found myself at a loose end in the Home Counties. In particular, it’s reinforced my desire to get myself over to Northern Ireland for some serious hill walking at some point.

I do, however, have some problems with the book or, more specifically, the walking routes that Muir provides. Roughly three quarters of them are of the ‘there and back’ variety, usually starting from the nearest point of access from a road. This is fine if the purpose it to get to the summit and back again in the shortest available time, but as this is supposed to be a walking guide, it would have been a lot better if more interesting routes were provided. I was particularly irked by the walking routes that Muir provides for The Cheviot and Hangingstone Hill. The latter is the highest point in Scotland’s Roxburghshire, but in reality it’s merely a shoulder of The Cheviot (county top of Northumberland). Muir provides separate routes, “for the sake of preserving national identities” but rather bizarrely starts both walks from Langleeford in the Harthope Valley. Not only that, they’re both ‘there and back’ walks when the two could easily be combined to produce a more satisfactory circular walk. Besides if Muir really wanted to preserve the national identity of Hangingstone Hill surely he should have provided a route starting in Scotland, perhaps from Cocklawfoot, for example. This is just one example; I could provide a lot more.

Another disappointment was the length of some of the walks. In fact ‘walk’ is something of a misnomer as some of them are no more than a 30 minute stroll from the car. Even given that this is all that is feasible for some of the English county tops I do feel more effort could have been made to give more extended and interesting walking routes. Just because you can park right next to the summit of Dunstable Downs, the highest point of Bedfordshire, doesn’t mean you should, especially when there’s a nearby chalk escarpment to explore. In complete contrast Muir’s route for Scafell Pike, which starts from Great Langdale, climbs both Bow Fell and Esk Pike before heading over Great End to Scafell Pike – a very challenging and somewhat circuitous route!

For pure, unadulterated peak baggers I would wholeheartedly recommend this book. For anyone who is genuinely interested in completing the UK county tops it is, of course, definitely worth checking out too. The book has certainly piqued my interest in the county tops but I’d be more likely to use it as a reference than a walking guide. There are some fantastic looking hills to visit contained within these pages, just not in the manner described in the book.

'The UK's County Tops' is available to buy from the Cicerone website.
Posted by Unknown at 19:12 No comments: