Having talked about it for at least six years and having purchased an appropriate tent back in January I've finally had my first wild camping expedition. The location for this momentous event was Sprinkling Tarn, perhaps not the most original of choices given its popularity as a wild camping site, but it is a beautiful spot and perfectly placed near a number of well known walking routes in the Lake District.

Whilst the initial walk up to Sprinkling Tarn from Seathwaite and the following day's peak bagging fest on the Allen Crags - Glaramara ridge can be viewed on the main mypennines website I thought I'd take the opportunity to blog about both my reasons for wanting to go wild camping and how I found my first attempt.

I should perhaps point out first that I'm not a complete novice at camping. Back in 2005, when I first began to consider buying a backpacking tent, I opted instead to purchase a 3 berth tunnel tent for Lisa and I to use for weekends away. We used this tent on numerous occasions over the next two years for weekend breaks visiting the North Pennines, Hadrian's Wall country, Kielder, the Ogwen Valley in Snowdonia, the Northumberland Coast as well as the first of a number of trips to the Lake District. 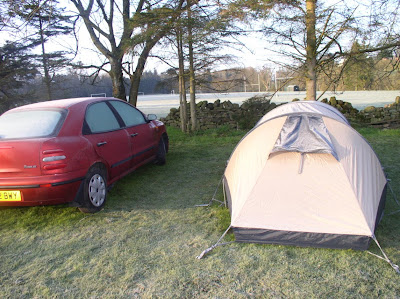 Whilst I had thoroughly enjoyed all those trips (though the midgies at Kielder were a nightmare!), and especially the liberty it gave us to explore new places, I have always still wanted to try out a wild camp. The main reason for this is quite simple - I love the hills and mountains of this country and, more specifically, I love being high up in the hills. As something that would allow me to spend even more time on the hills then wild camping was something that I just had to try sooner rather than later. The opportunity to enjoy seeing the sun come up and go down from a high vantage point was of particular appeal to me.

In January of this year I finally took the plunge and purchased a backpacking tent along with a new, lighter, sleeping bag and a few other necessary accoutrements. Earlier, for Christmas, Matt had already bought me a Spork and a trowel ...

Having all the necessary equipment it was then a case of waiting for the days to grow longer and for a time when both Matt and I would be available for a whole weekend. Our trip was first scheduled for the middle of June but just the day before I cancelled, the forecast for that weekend being heavy rain and gale force winds neither of which I particularly wanted to experience on my first wild camp, especially in the 'wettest place in England'.

So it was that last Saturday I finally got to pitch my tent by Sprinkling Tarn. So how was it? We arrived at Sprinkling Tarn just as the light was beginning to fade and we soon both donned our head torches as we pitched our tents. I'd only had one practice attempt at putting the tent up (on my front lawn) so thankfully it was easy enough to manage 'out in the field'. I was also a bit concerned that, given the popularity of Sprinkling Tarn as a wild camping location, that there would be loads of people up there and it wouldn't feel very wild at all. I needn't have worried, while there were a few other tents dotted about none were visible from where we pitched and to all intents and purposes might not have been there. 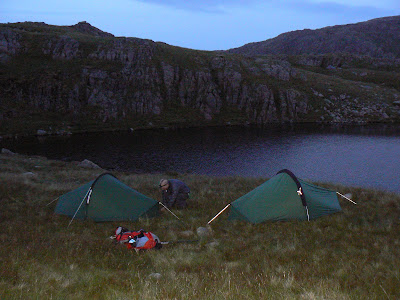 Having pitched our tents and stowed most of our gear away it was time for some long overdue dinner / supper. For ease of cooking I'd brought a couple of Wayfarer meals along with me, the first time I'd tried these. For supper I had beef and dumplings. It was tasty enough but I found the portion size a bit disappointing especially as, by this point, I hadn't had anything to eat for about nine hours. Half way through heating up the water the pan and stove overbalanced tipping all the water out so I had to start again. Thus I learnt my first lesson - I needed a smaller pan as the one I'd brought with me was far too large my camping stove. 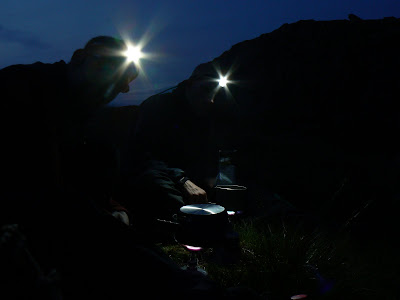 Having finally finished our supper at about 10.30pm we then played around for a while testing out the range of our respective Petzl head torches (boys and their toys!) before finally retiring for the night. Strangely enough I never sleep well in a tent, at least not on the first night. This time was no exception. While I managed to get to sleep I was awake by 3.30am and couldn't sleep for the next couple of hours as I kept peeping outside the tent to see what the weather in the hope that I'd get some nice photos of the early morning sun. 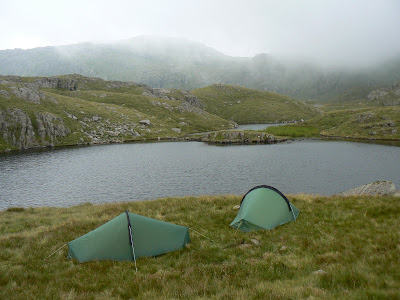 Unfortunately it was not to be, patches of hill fog kept rolling over the higher fells and at one point (at about 4.30am) I couldn't even see the tarn just a few metres away. Finally giving up on some dawn photos I managed a bit more sleep (where I dreamt that I woke up to find dozens of tents surrounding us) before I eventually gave up on the idea of sleep altogether so got out of my sleeping bag and went to take some pictures of our pitch. 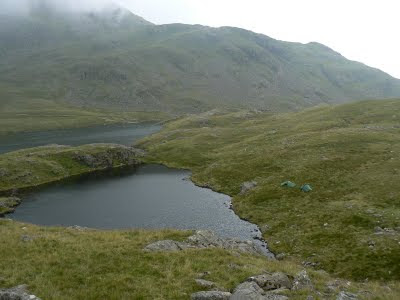 After accidentally waking Matt up we were soon cooking breakfast. This time it was beans and bacon for me and another disappointingly meagre portion from Wayfarers. After breakfast we had a little wander over to the western flank of the fell to enjoy the views of Sty Head, Wasdale Head and Great Gable (which seemed to be attracting what little sun that was breaking through the clouds). By 9.30am we had packed up and were ready to head for Allen Crags. 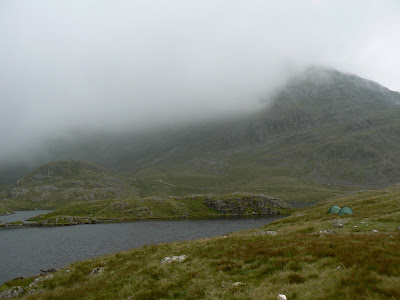 Sadly I didn't get to experience a sunset or a sunrise but on reflection Sprinkling Tarn may not be the best location for either of these as the views are fairly enclosed by the surrounding mountains. I'd also taken plenty of water with me so I didn't need to go in search of a decent water source and (thankfully) neither did I need to make use of the trowel. In some ways then, both in terms of the romance and practicalities of wild camping, it wasn't what I had hoped / expected. 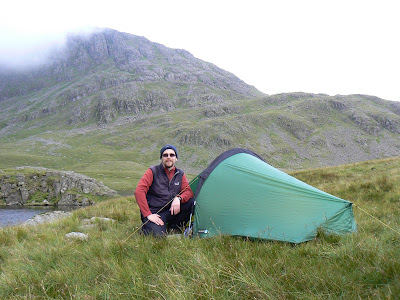 On the other hand it did feel good to be sleeping out in the hills and, despite my oversized pan, I especially enjoyed sitting by the tarn in the dark cooking my supper. It all felt so natural. Having had my first taster I'm now really looking forward to the next trip which, hopefully, will be in September and will probably be in the Lakes again as I endeavour to complete the round of Wainwrights (just 19 left to go). If all goes to plan I'll once again go out with Matt but sooner or later I'll also need to try a solo trip. For peaceful solitude that is probably the ultimate although it is also quite a daunting prospect. It took me a few times to feel completely at ease out hill walking on my own, especially in remote areas. Whilst that is almost second nature to me now I imagine I'll have even less luck sleeping the first time I go out for a solo camp.