Exploring the towns and villages of the north

Located on the A65 between Skipton and Settle, and just within the boundary of the Yorkshire Dales National Park, the village of Long Preston has always been somewhere I've travelled through rather than being a destination in its own right. In fact I've worked out that I must have passed through the village no less than 180 times on my way to, or on my way back, from walks in Bowland, the Dales, Howgills and Lake District.  Prior to last weekend when, for the first time I stopped in Long Preston for a walk, the most memorable thing about the village was the horrible blind right-hand turn back on to the A65 from the Slaidburn road. 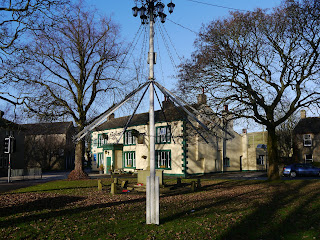 As it happened I had a wonderful walk (in particular the path along Long Preston Beck is a real gem) which made me regret not stopping there earlier. More to the point though it made me think in a wider sense about how many villages and towns I had now visited, either at the start, finish or during the course of a walk. I've worked out that, since 2004, I have set foot in over 200 towns and villages in the north of England from Castleton in the Peak District to Hethpool at the northern end of the Cheviot range during the course of a walk. 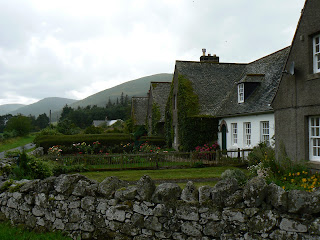 The objectives of most of my walks have been particular summits, trig points or specificr features such as a crag or waterfall. Inadvertantly, it seems that my passion for hill walking has led me to hundreds of places which I'd never have visited otherwise. If you also include all the places I've driven through but not actually stopped in the number would probably rise to over 500.

Out of all the towns and villages I've visited while out walking it would be extremely difficult to pick out a handful of favourites for this blog. Instead I've decided to highlight five places, in alphabetical order, that I've set foot in for the first time this year and which have made a particularly strong impression on me.

Arnside  - Arnside, along with Silverdale to the south, lends its name to the Arnside and Silverdale Area of Outstanding Natural Beauty, one of the smallest AONBs in the country. Arnside sits below the northern slopes of Arnside Knott looking across the Kent Estuary towards the Lake District. The seafront itself is understated and rather quaint. Carrying the train line from Arnside Station across the Kent Estuary is the magnificent 50 arched Kent Viaduct, a feature that, for me, adds immeasurably to the attraction of the view across the estuary. The combination of the village, estuary, viaduct, the views across Morecambe Bay, low limestone cliffs and Arnside Knott together make an irresistable package. 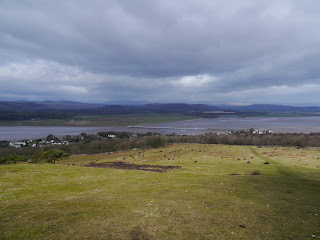 Blanchland - Situated on the Northumberland side of the border with Durham in the North Pennines the medieval village of Blanchland is located in the upper Derwent Valley. The village is largely built of stone from the remains of a 12th century abbey. In the 19th century it became  a centre for lead mining, the archaeological remains of which add interest to the vicinity of the village. Apart from being very attractive in its own right the village is also a good place for starting a walk up on to the moors above, as I discovered just a few weeks ago. 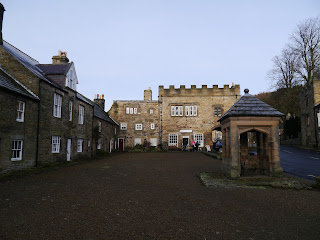 Hutton-le-Hole - I do like a nice village green and I don't think I've come across one quite as impressive as that at Hutton-le-Hole, it even has its own beck running through it. Hutton-le-Hole is apparently one of the honeypot villages of North Yorkshire but when I first visited there in January it was very quiet. It is not hard to see why it is so popular, the village is beautifully situated in the Tabular Hills with the heathery moors of Hutton Ridge and Spaunton Moor just to the north. 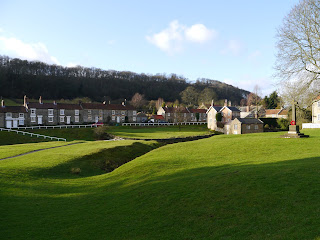 Melrose - In August I spent a week's holiday with my family in the Scottish Borders where we stayed in a house in Melrose. It is no exaggeration to say thay by the time we left I was seriously thinking of forsaking the hills I love in northern England to move north of the Border and settle in Melrose. It is a lovely little town with great character helped by three outstanding features; the fantastic mini-range of the Eildon Hills, one of the UK's finest monastic ruins in Melrose Abbey and a beautiful stretch of the River Tweed. 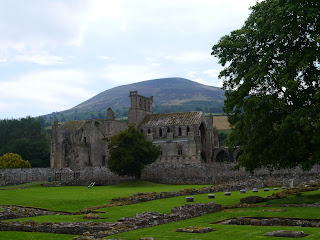 Walsden  - Squeezed on either side by steep moors Walsden, like neighbouring Todmorden to the north, manages to pack an awful lot into a small space. The presence of a train station on the Leeds - Manchester Victoria line means that the village is easily accessible by public transport, something which cannot be said of a lot of places I go walking. Whilst the hill walking options from Walsden are quite varied the real gem in my mind is the presence of the Rochdale Canal that also runs through the village. I walked the section from Warland back into Walsden and it was a lovely, and in the autumn at least, colorful path. I aim to be back at Walsden station next year to head up Reddyshore Scout. 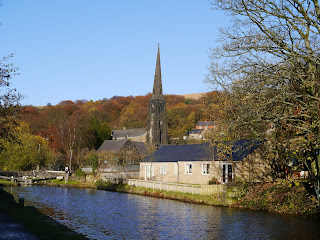 ﻿
I look forward to visiting even more new towns and villages during the course of my walking adventures next year.
﻿
Posted by Unknown at 20:38 No comments:

This is my latest attempt at putting a short video together from one of my walks. I actually took this footage back in April but my old computer was unable to handle editing the video files.

On this video there is less of me actually walking about and I've also added some music and a few stills as well. It was a super walk. Littondale is a beautiful valley in the Dales whilst the ridge walk from Horse Head to Birks Fell featured great views. The trig point on Horse Head Moor is one of my favourite places I've been to (read my original walk report).

This is my third attempt at doing a video. The footage was taken on last Sunday's walk up on to the modest height of Newton Moor in the southern Yorkshire Dales.

I'm quite pleased with some of the footage but I don't seem to be having much success in reducing the wind noise. See what you think.