There are 33 summits in the North Pennines which, if you are following the list devised by John and Anne Nuttall, attain the exalted height of 2000ft. Although this figure is some way short of somewhere like the Lake District actually trying to attain the summit of each of these North Pennines mountains is still something of a challenge.

One of the reasons for this is that, with the exception of the summits that are visited by the course of the Pennine Way (Knock Fell, Great Dun Fell, Little Dun Fell and Cross Fell), none of the other 29 tops can be visited by using a public right of way. A few, such as The Dodd and Great Stony Hill are close enough to a right of a way to require only a short detour but the majority stand well away from well trodden paths and before the CRoW Act would have been seen by most walkers as being quite out of bounds. 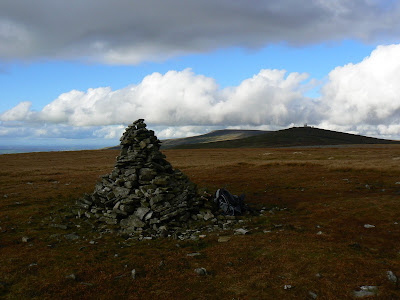 Whilst the CRoW Act has now made it permissible to visit these summits there is still the issue of what route to take, a problem exacerbated by the fact that, without the benefit of a well trodden right of way, walkers are faced with crossing miles of tussocky grass, deep heather and substantial areas of peat hags and groughs. All of this adds up to, in my opinion, some of the roughest walking conditions in the country. 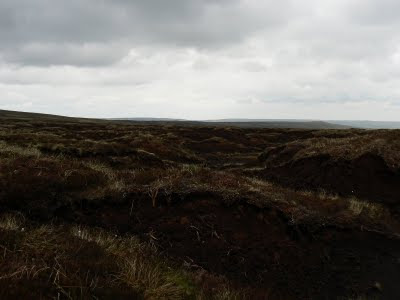 While the high places of the North Pennines may be lacking in useful paths or bridleways they certainly do not lack in walls and fences. It is these walls and fences that often provide the key to navigation, especially in poor visibility, where they act as both a collecting feature as well as being a useful hand rail to follow. In fact in many areas of the North Pennines boundary fences are often the only visible feature of note. 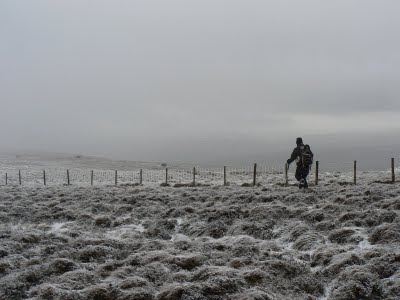 I've done half a dozen walks in the North Pennines this year and, in addition to the ones I'd already been to, I have visited another 13 'Nuttall' tops (I only have 4 left to do now). A recurring theme of these walks has been the miles upon miles of fence that I've followed. Furthermore many of the summits I've visited have lain within a few yards of a fence. Fences have become an almost constant companion and on at least two occassions this year I must have shadowed about 10 miles of fence in a single walk. 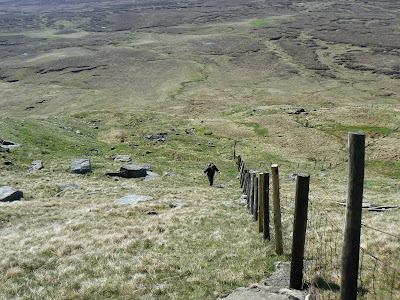 As mentioned there are very few paths that visit the higher summits in the North Pennines. Since fences are often the only navigational guide available a slim trod, created by walkers, will sometimes develop alongside a fence. More often than not though the only sign of anyone else having passed by is the occassional sighting of a boot mark in the peat. Of course sometimes it can get tedious. In poor visibility, when all you've seen for several hours is a frost lined fence and the frozen peat below you're feet then you do yearn for something different. 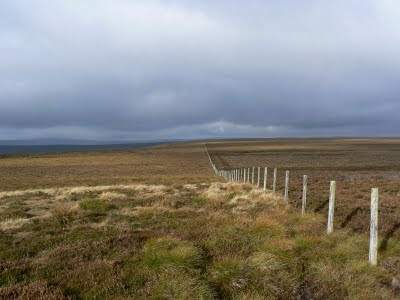 So far I've not really done a very good job of promoting the North Pennines as a good area to go walking. Certainly it would not be to everyone's taste. However, at a time when areas like the Lake District are becoming increasingly overcrowded the North Pennines offers sanctuary for those who perhaps treasure peace and solitude over excitement. Recently I saw more people on the small summit area of Kidsty Pike (hardly the most popular Lake District mountain) than I have seen in over 60 miles of walking in the North Pennines this year. 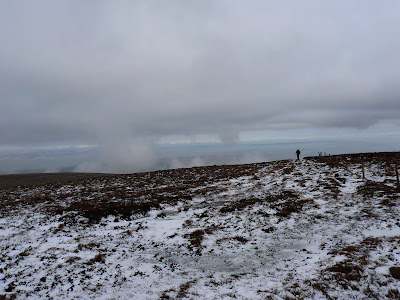 Indeed it is the very fact that it is so rare to actually come across another walker that the North Pennines has so much appeal to me. There are of course lots of other reasons why I enjoy walking there; the bird life, interesting flora, the wide ranging views and the general feeling of remoteness are just a few of them. On the other hand I wouldn't want to encourage too many people to go therer, I'd rather it stayed the way it is. I have three more Nuttalls to tick off from my 'to do' list. After that I'll move on to complete the remaining Dewey tops (summits over 500m) that I've not yet visited. I still have many more miles of fence following to look forward to.